On Wednesdays I usually stop by the farmers’ market to check on my volunteers, greet some farmers, and do just a little shopping if I really need something. Today, I meant to just get eggs, but Kevin Ottmers had these delightful looking green tomatoes, Milagro had some fragrant bitter greens that I hadn’t seen before, and things just snowballed from there.

I ran an idea past the Market Manager: “Huntley, how does a fried green tomato, over easy egg, and sauteed greens sandwich sound?” “Well, ‘Cartwheels’ (yes, he calls me Cartwheels and I may never know why), add some pork and I’d eat it.” So I walked over to Richardson Farms and picked up some pork belly too.

Heat 3 tablespoons of the oil in a cast iron skillet. This is a very minimal amount of oil. I prefer it this way; it should just coat the pan plus a little extra. While the oil is getting hot, slice the green tomatoes into 1/2-inch-thick slices. Mix the cornmeals and a pinch or 2 of salt. Coat the slices of tomatoes in the cornmeal and add to the skillet. Cook on both sides for about 3-4 minutes over medium-high heat. It should be high enough to brown the tomatoes fast enough so they don’t get too soft, but low enough so that the oil doesn’t start to smoke.

If you do more than one batch, add the rest of the oil if need be. As you remove the tomatoes from the oil, place them on a paper towel and sprinkle with salt and pepper.

*You can cook the bacon in the skillet first and use that oil instead.

Heat the oil in a pan and add the greens. Saute over low-medium heat for just about 3-4 minutes, until just cooked.

Eggs Over Easy
1 egg per sandwich
sprinkle of salt

Cook the egg as you normally would. For this sandwich, I cracked the egg into the bitter greens pan (after setting them aside) and cooked on both sides for just a minute or 2 over medium heat. I like it a little runny (as evidenced by the pictures). Sprinkle with a tiny pinch of salt.

Assembly…
Toast your choice of bread (I usually go with Udi’s: basic and consistent). Spread the bread with aioli or mayo if you so desire. Next, place the pork (cooked how you like it), the fried green tomatoes, the egg, and top with the greens. Sprinkle with a little sea salt. 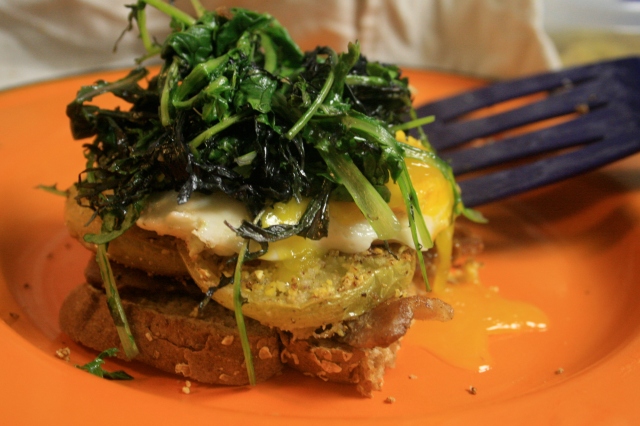 I write. I eat. And I cook. I write about what I cook and eat. I love finding new foods, being inspired to make something I've never made, and most of all I love feeding other people things that they have never tried before. I like disproving myths about food and what it means to eat well, to eat healthy, often on a budget, and for some of us- to eat with a bunch of food allergies (and still eat well!).
View all posts by Salts Kitchen →
This entry was posted in Dietary Restrictions, Recipes, Salty and tagged Eggs, gluten free, lactose free, Pork, Sandwiches. Bookmark the permalink.