I do love a good crookneck. Actually, to be honest, they’re not my favorite. I had a ton in my fridge last week and roasted a few with herbs and that was tasty, but really I wanted something where the squash was not necessarily the star of the show. So I stuffed them. I used whatever I had in the house and a few scraps that were on their last leg and I thoroughly enjoyed this. I didn’t know what to do with the dandelion greens as they were a little too bitter on their own for me, and the chard was on its way out… so, stuffed squash!

Cook the quinoa according to instructions. I use half veggie broth and half water. Set aside. Saute the carrots, onion, and green onion until onions are just translucent and the carrots have just a little crunch to them. Add the greens and saute until just wilted. Add quinoa to the pan with the veggies and mix it up. Taste for salt, pepper, and potentially a splash of extra virgin olive oil.

While the vegetables are cooking, prepare the squash. Wash and cut off both ends. Slice in half and scoop out the seeds with a spoon. 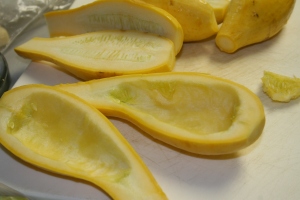 Preheat the oven to 350 and lightly brush the crooknecks with olive oil. Stuff the squash with the quinoa stuffing and then sprinkle grated dos lunas raw milk cheese on top. This is my new favorite discovery. Elise and her cousin Xavier help her father run the raw cheese booth at the SFC Farmers’ Market at Sunset Valley at the Triangle. She was so convinced that I too could eat this raw cheese without a stomach issue that she gave me a chunk to try. I took it home and ate it slowly. I sure did enjoy it and while I still eat it slowly, I have bought many a piece since that day.

Cover the baking dish with tin foil and bake at 350 for 30 minutes, or until the squash is a little tender but not mushy. Remove the tin foil and bake for another 10-15 minutes at 400. The stuffing will crisp up a bit. 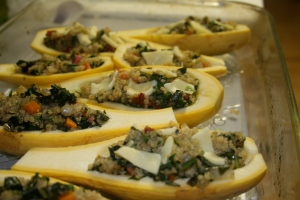 I write. I eat. And I cook. I write about what I cook and eat. I love finding new foods, being inspired to make something I've never made, and most of all I love feeding other people things that they have never tried before. I like disproving myths about food and what it means to eat well, to eat healthy, often on a budget, and for some of us- to eat with a bunch of food allergies (and still eat well!).
View all posts by Salts Kitchen →
This entry was posted in Dietary Restrictions, Recipes, Salty and tagged gluten free, lactose free, Quick and Easy Dinner, Quinoa. Bookmark the permalink.