I received a text a week or so ago from a friend telling me he was in the mood for a strawberry cupcake. Then a text later that he had located one, ate it, and it wasn’t great. Apparently he did not realize that this meant he had just challenged me to create a GF/DF strawberry cupcake. So I did just that. I’m still on a mission as I don’t think this wins the cupcake prize, but it was tasty and the frosting refreshing and not too sweet.

The cake is from Elana’s Pantry and uses coconut flour which I am a big fan of. I’d adjust this next time to be more cakey, and vanilla-ey if I can.

In a large bowl, combine the coconut flour, arrowroot powder, salt, and baking soda. In a medium bowl, whisk together the eggs, agave nectar, and vanilla extract. Blend the wet ingredients into the coconut flour mixture with a handheld mixer until thoroughly combined, then fold in the strawberries.

Scoop into prepared tins. Bake for 20-25 minutes. Let the cupcakes cool completely before frosting them.

Unfortunately, I was having a tough time with the frosting consistency, so didn’t write down the final exact amounts but it went something like this…

Beat butter and cream cheese together. Beat in sugar. Fold in the strawberries. If you want it a little pink, beat half the strawberries in and then fold the other half in. DO NOT beat in all strawberries. The consistency changes too drastically and is drippy. 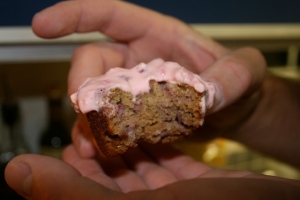 I write. I eat. And I cook. I write about what I cook and eat. I love finding new foods, being inspired to make something I've never made, and most of all I love feeding other people things that they have never tried before. I like disproving myths about food and what it means to eat well, to eat healthy, often on a budget, and for some of us- to eat with a bunch of food allergies (and still eat well!).
View all posts by Salts Kitchen →
This entry was posted in Dietary Restrictions, Recipes, Sweet and tagged Dessert, gluten free, lactose free, pastries. Bookmark the permalink.