I had some leftover white wine, some grapefruit juice, and a big thing of sparkling water in the fridge and none of those items was I planning to drink. Then… I had a friend coming over and we were supposed to go have sangrias and I asked if I could make her something instead of going out. So I put each of these leftover ingredients in our glasses, a splash of agave, a squeeze of lime and voila, a very delicious and refreshing drink. We did drink a couple of these and then thought it would be a good idea to go to Goodwill for some shopping. I bought an ugly skirt, but that’s a whole different story.

I made this again later in the weekend for Sunday’s dinner and used orange instead of lime and some less flat bubbly water. It was so refreshing after working in the garden, I’m tempted to make this all the time. 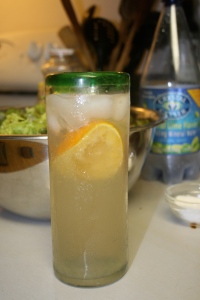 I write. I eat. And I cook. I write about what I cook and eat. I love finding new foods, being inspired to make something I've never made, and most of all I love feeding other people things that they have never tried before. I like disproving myths about food and what it means to eat well, to eat healthy, often on a budget, and for some of us- to eat with a bunch of food allergies (and still eat well!).
View all posts by Salts Kitchen →
This entry was posted in Recipes and tagged Drinks. Bookmark the permalink.

1 Response to The Porch Swing