I’m not sure I’d ever had sweet potato pie. I’m not a huge “spice” fan: you know, cinnamon (hate it), nutmeg, cloves, but I do love sweet potatoes. And I had about 15 pounds of sweet potatoes in the cupboard. Yes, I am a garbage disposal for friends and family. I don’t mind- I like the challenge of figuring out what to do with a massive amount of ingredients. In fact, I love it, but it does fill up the fridge to capacity. With 15 pounds of 1 ingredient, I am forced stretch the imagination and think outside the box (at least after the first 10 pounds). I made curry (to be posted soon), baked sweet potatoes, sweet potato and black bean salad, and still had a couple left. So… sweet potato pie edged it’s way onto my radar.

Actually, I really wanted to experiment with a new pie crust “mix” and I owed a friend a favor. So I decided to make my friend (and colleague) a sweet potato pie. It was a little bit of a challenge seeing as he’s from the south and has probably eaten some serious versions. But, the use of the power drill, the shovels, the seeds, and the numerous trips to his house to borrow other various sundries (not to mention using his facilities when my water was off for a week) deserved a pie- at the very least. So… a pie I baked. I brought it to Andrew at the office which meant it was shared with all the staff.

I used Gluten Free Pantry pie crust mix. Now, when it comes to GF, a “mix” does not necessarily mean the easy way out- the cop-out if you will. This one involves an egg, butter and shortening (okay, that’s what I’ve always done), apple cider vinegar, and more. And I must say, it was a delight. I felt that it was a little drier than I wanted it to be, which is strange because it was so wet that I couldn’t even fold it into the pan properly. Next time, I’ll use an egg wash and sprinkle sugar as well. Next time.

Rolling out the dough

As I mentioned, the dough was a bit tacky. I rolled it out between 2 pieces of parchment paper and it had some issues getting into the pan. I ended up having to press a few of the pieces back into place, which was just fine once I crimped the edges. The mix makes 2 double 8-in pies. So I used half the mix and had some leftover to make mini-cookies.

For the sweet potato filling, I made a variation of Marion Cunningham’s version from her Fannie Farmer Cookbook. This is very much one of my go-to books for all things tasty. I love what Marion does, and while I know she has aged tremendously in the last few years, the last time I saw her I decided she was the kind of beautiful old woman I’d like to be. That was several years ago when my mother and father were in a car accident in Northern California, and Marion came with her date walnut cookies (and other various treats) to the hospital. But that’s another story. As is the first time I tried those cookies of hers…

Preheat the oeven to 425F. Line a 9-in pie pan with half the pastry dough. Combine all ingredients in a bowl and whisk until homogenous. Pour into the pie crust. Bake 10-15 minutes, and then reduce heat to 300F and bake for another 50 minutes or until the filling doesn’t jiggle. 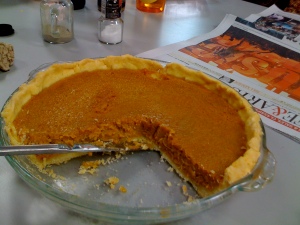 Lo and behold, it was DELICIOUS! I thoroughly enjoyed the filling and even the crust was pretty good. Actually, I’d say it was “good for gluten free”, meaning it was tasty but a real crust would have been better.

I write. I eat. And I cook. I write about what I cook and eat. I love finding new foods, being inspired to make something I've never made, and most of all I love feeding other people things that they have never tried before. I like disproving myths about food and what it means to eat well, to eat healthy, often on a budget, and for some of us- to eat with a bunch of food allergies (and still eat well!).
View all posts by Salts Kitchen →
This entry was posted in Dietary Restrictions, Recipes, Sweet and tagged Dessert, gluten free, Pie, sweet potato. Bookmark the permalink.