Oh my word. The word is Tasty. Yum. Delightful. That’s 3 words. I’m okay with that. I made 2 versions of this Soda Bread by Blackbird Bakery. I rarely attempt to make bread because success rate of “amazing recipes” is so low. However, I’d heard good things about Blackbird’s Ms. Morgan so I gave it a whirl. And I’m glad.

I made it first to go with folks coming over for a pumpkin carving gathering (note to self: don’t carve pumpkins 2 weeks prior to Halloween or you will have a pile of compost on your front doorstep by the holiday). This first version I measured according to how I learned to measure when I was baking glutenfully. You know: scoop the flours with a scooper into the measuring cups, level it with a knife, never shake, never pack, etc. Ms. Morgan warns that the dough will be “sticky”, but I tell you what, this dough was down right liquidy. It still turned out deliciously, but I did end up dousing my hands in rice and tapioca flours over and over.

Version I: Olive and Rosemary

I made it a second time and did NOT measure as precisely. I mean, I measured and I leveled, but I scooped right into the measuring cup (using the measuring cup). I don’t know if this is generally the way of the gluten-less bakers, or if this is simply the way that THIS recipe worked, but this way actually ended up a little bit better (if that’s even possible) and was significantly easier to work with. This second loaf I also changed it up and made it a rosemary, walnut, gorgonzola bread. And some more yum. 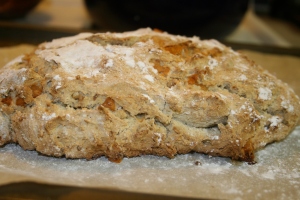 Preheat oven to 400°F. Blackbird Bakery suggests a baking stone, but I don’t have one so I used a regular sheet pan.

In a large mixing bowl, whisk together all the dry ingredients until well combined. Add the egg, buttermilk, and water and stir until very sticky. Allow the dough to rest for a couple of minutes.

Stir in the chopped olives and rosemary.

Lightly dust parchment paper with tapioca flour and/or rice flour and knead the dough for about a minute. Line the baking sheet with parchment paper and scoop the dough onto the paper. The first version was so tacky that I had to roll it on from parchment sheet to parchment sheet (it was also almost impossible to knead). Shape the bread with your hands. I like my bread crackle-y and misshapen.

Version one I also sprinkled with olive oil and sea salt right before baking. I used rice flour, tapioca starch, and bob’s red mill GF flour to knead. I like the salt touch!

The second version was gorgonzola, rosemary, walnut. The dough was sticky and tacky but easier to shape. I kneaded it right in the bowl with just tapioca starch. I sprinkled with tapioca before baking as the original version suggests.

I write. I eat. And I cook. I write about what I cook and eat. I love finding new foods, being inspired to make something I've never made, and most of all I love feeding other people things that they have never tried before. I like disproving myths about food and what it means to eat well, to eat healthy, often on a budget, and for some of us- to eat with a bunch of food allergies (and still eat well!).
View all posts by Salts Kitchen →
This entry was posted in Uncategorized. Bookmark the permalink.